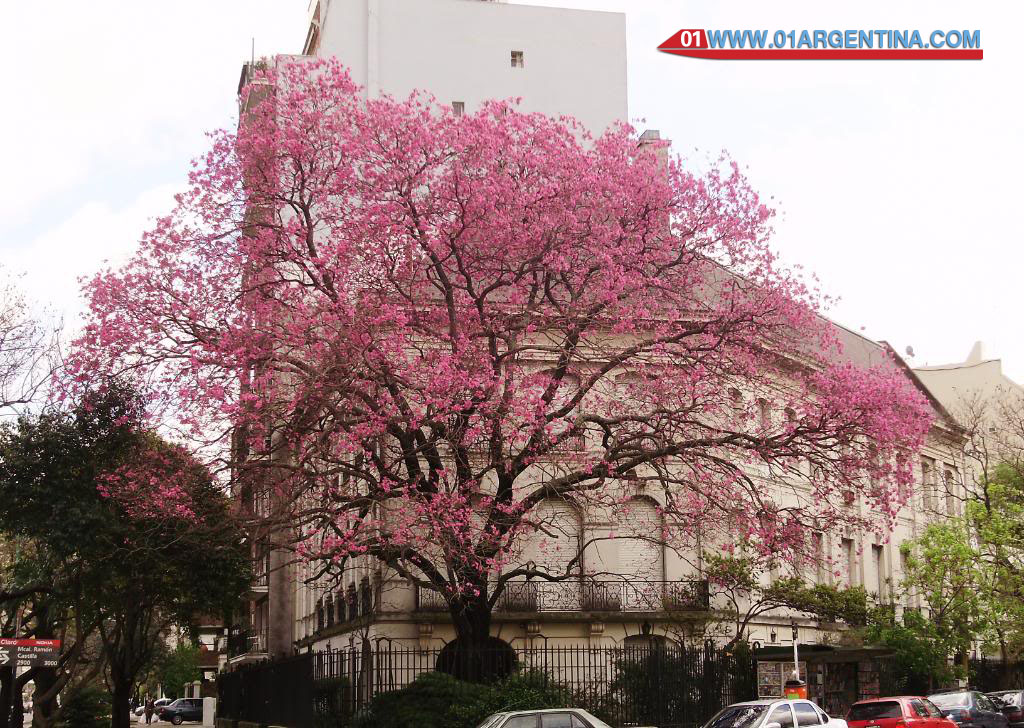 If you are looking for travel information of Buenos Aires you should know that it is city is known for the cultural value of their trees, part of the related life of its inhabitants ecosystem. Grown for decoration of public spaces, shade and protection, differing in size, shape and color, but also the texture of their trunks and branches, the leaves and flowers type. According Phytosanitary 2011 Census, there are about 430,000 trees, equivalent to 1 per 7 inhabitants, and the World Health Organization recommends, to improve air quality in a city, 1 every 3 inhabitants. According to the agronomist Ana Guarnaschelli1, the World Health Organization indicates how convenient 10-15 m2 of green space per inhabitant, while the value in the city of Buenos Aires is 6.1 m2 / inhabitant.
Census data say there are 51,740 trees in parks and squares and on sidewalks 372,625. According Diego Santilli (2014), current Minister of Environment and Public Space, the goal is to reach 100.00 in green spaces and 420,000 alignment (sidewalks). Eduardo Haene, Director of the Ecological Reserve and technical adviser woodland master plan, said the addition of new indigenous species will be reflected in biodiversity (Rocha, 2013).
The selection of urban trees corresponding to various criteria. From the ornamental point of view, has to be considered the crown shape, the color of the foliage, the characteristics of its flowers and fruits. Moreover, its propagation, longevity, rhythm and type of growth, climatic and edaphic requirements, suitability to pruning, resistance to pests and diseases. According to health considerations the allergenic aspect also has to be considered.
Woodland aesthetic benefits relate to the ability to see colors, structures, shapes and densities. Most of this aesthetic experience is subjective, and impacts on the mental and emotional states of people (Tyrväinen et al, 2005). The color is initially a physical effect, but in sensitive people immediately communicates with the senses (Kandinsky, 1946).
A nature-oriented city can allow its people recover from daily stress. Trees contribute to a better quality of life in the city environment. Each tree provides up to 10 m3 daily oxygen, helps eliminate toxic gases from the air and reduce noise pollution of 8-10 decibels per meter of glass. Trees are a visual decontaminant and summer temperature decrease of 1 to 3 degrees.

The first street of Buenos Aires was built during the colonial period under the Viceroyalty of Vertiz. “Alameda” was called but it was actually a street with ombúes, bordering the river. Until 1885, the development of tree planting was limited and conducted by the initiative of the inhabitants. In those days, there were about 1,100 units in the city.
Under President Domingo Faustino Sarmiento (1868-1874) began the trend to plant trees as a constant. Towards the second half of the nineteenth century, Buenos Aires incorporated the idea of ​​green and healthy city model, under an organismic notion of the urban fabric. “The city is regarded as a living organism breathing through the vegetation, promoting the quality of life of its inhabitants,” said Graciela Benito (Rocha, 2013), curator of the Botanical Garden. This view prevailed in the planning of the Buenos Aires public spaces, where the landscape interventions were enhanced by the Directorate of Parks and Tours of the City by the consecutive steps of the architect Charles Thays and agricultural engineer Benito Carrasco, who between 1891 and 1918 traced the guiding principles of this work, not only contemplated the aesthetic, but also hygiene, leisure and population expansion.
The French architect Jules Charles Thays, (1849-1934), a disciple of Edouard André, a landscape architect and French botanist, was summoned to Argentina by Miguel Crisol in 1889 to design the park Sarmiento Cordoba. He decided to stay in the country and was appointed Director of Parks and Gardens in Buenos Aires in 1891. In the competition to qualify in this position he wrote: “Man, especially working, needs distraction is there something more healthy, noble, True, the contemplation of trees, beautiful flowers when they are sorted happy? The spirit then rests, and the appearance of beauty, purity, produced an immediate effect on the heart “(Berjman, 2002). He worked in a period when the city grew rapidly as a result of immigration, especially from Spain and Italy. For his initiative 21,250 trees were planted and by 1901 there were about 65,000. He designed the open spaces of Buenos Aires, his legacy still being strongly felt in the city. Its major projects include the planting of trees along the streets, remodeling squares and public gardens, the design of new parks and extension of the former.
He traveled the country looking for species that serve to decorate the streets, squares and parks. He brought from the north and northeast various species, including some exotic. One of the largest companies Thays was the “Tres de Febrero Park”, an open area covering several square kilometers filled with thousands of trees, flowers, many fountains and monuments located in the neighborhood of Palermo.
A personal project was the “Buenos Aires Botanical Garden”, for which he asked the city government about 8 hectares, which he designed in sections to show the plants organized by continents, with a large section dedicated to native plants Argentina. The garden features the first Ginkgo Biloba planted in Argentina. Completed in 1898, it bears the name “Carlos Thays Botanical Garden of Buenos Aires”.

Ornamental trees. This investigation concerns the ornamental aspect of trees, from the color of its flowers, which change the color of the city during the long spring – summer.

Avellanedae Tabebuia (family Bignoniaceae) is a tree native to America distributed from northern Mexico to northern Argentina planted as an ornamental tree in parks and some streets due to the imposing appearance of their magenta flowers. It is a big tree, deciduous, which can reach 30 meters. Its corolla is pink or magenta, but can also be white. The flower is tubular, grouped in terminal clusters. In early spring, and in early September, as leaves and even without announcing it shows its countless flowers that impress with their beauty. The show is ephemeral, lasting a few days.

Chorisia speciosa, Samohu (Family Bombacacea) is a tree native to Argentina and Brazil (Dalgas Frisch, 1995). It grows rapidly when water is abundant and can reach 25 m high with a wide corolla of hemispherical shape. Its trunk can be bottle-shaped (hence the name), widened in the lower third and very green; bark relatively smooth in young specimens, it is studded with conical spines in older specimens. The flowers are hermaphrodite, solitary, stalked, 5 oblong petals 7-9 cm long and 2-3 cm wide, pink with dark spots at the base. Very showy, open before the leaves appear. The flowering period is changing, early and late copies exist. Some bloom in October, in December and other flowers can last until May or June. In the same period some have flowers and other fruits, which are oblong capsules 15-20 cm long and 5-7 cm in diameter, green until maturity. It is also decorative in the stadium as fruit open, showing silky white cotton around the seeds. Chorisia insignis species, Yuchán, is the variety of Amarillo Palo Borracho, with yellowish-white flowers and corolla purple to brown checker. It may be a relatively short large tree trunk-shaped bottle that allows you to accumulate water, whose diameter can reach 2 m; or a high tree, slender trunk

Melia azedarach (Family Mahogany), deciduous tree, native to India and Pakistan, but now grows throughout the warm parts of the world. Is colorful and fragrant flowers in clusters, in numerous thin petioles, white to the purple with central tube is usually dark purple. They appear at the end of spring or early summer. It is ornamental in winter when it loses the leaves and there are only some fruit, spherical, globular and ocher, hanging in clusters.

It is impossible to travel in November in Buenos Aires without experiencing the joy of seeing the jacaranda blossoms. Jacaranda mimosifolia (Family Bignoniaceae) is a tree native to subtropical South America, widely planted throughout the city for its beautiful and durable flowers, bluish-purple, tubular, grouped in inflorescences paniculares at the end of the branches. They appear in spring, in late September, very abundant, before their leaves, and stay two or more months. Some even have flowers in the summer, mixed with leaves. Its foliage, very elegant, like a set of feathers tenuous.