Tips to enjoy a day at the Perito Moreno Glacier. 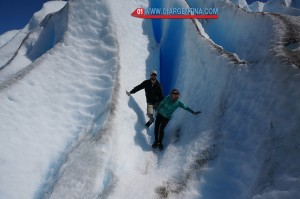 The tour starts in the “Bajo de las Sombras” port about 6 km. The minitrekking is from early August to late May. Mirador before the glacier, where you embark to cross Lake Rico, reaching the opposite shore about 20 minutes by boat off the south wall of Perito Moreno glacier.  After landing you access the refuge where the guides organize groups each consist of up to 20 people. And so began a walk along the lake shore about 20 minutes to the glacier. At the edge of the ice, the guides put crampons participants who receive instructions on how they should move on the ice. The tour on the glacier takes about 2 hours, and during the course of it you can enjoy a variety of ice formations such as cracks, crevasses, drains, small ponds, etc. The hike is moderate. The ice surface over which you walk is irregular, but firm and safe. Explanations about flora, fauna, and general glaciology of the region as well as the particular phenomenon occurring in Perito Moreno glacier and eventually produces its rupture receive. At the end of the walk, we return to the shelter through the lush Magellanic forest.

• Limitations: this tour because of the degree of effort and difficulty that is only suitable for people aged 10 to 65, and is not recommended for overweight people is EXCLUSIVE for pregnant women, people who have illnesses at risk of deterioration functional or organic when traveling, and individuals with disabling diseases in relation to coordination and motor skills, people with heart problems or invasive cardiac surgery

• The value of the tour does not include entrance to National or lunch Park.

• It has a bus for the journey from El Calafate to the national park (80km) who require such service. It includes a visit of an hour or gateways panoramic viewpoint where you will be met by a guide from our company. All services are performed daily and has continued attention by bilingual mountain guides.

What is the glacier?

We begin by defining a glacier as a large mass of ice that has two distinct zones: zone of accumulation and loss. The first is the area where constantly nieva.Y loss is one in which the glacier ice mass lost due to evaporation and melting (especially in summer). These giant ice masses move down due to the slope of the valley that shelters and end abruptly in lakes, cliffs, or gently forming terminal moraines (accumulations of earth and stones pushed by the glacier). Note that there are glaciers in many parts of the world: Andes, Alps, Himalayas (Nepal), Antarctica, New Zealand, Karakorum (Pakistan), north pole, even in Africa !!! At Mount Kilimanjaro and Mount Kenya. But none characteristics Moreno Glacier.

Why is the Moreno Glacier is unique?

Mainly there are 3 characteristics that differentiate this glacier: Access, State and the phenomenon of rupture.

1) Access: A few glaciers in the world are as simple and safe as this access. The Moreno Glacier is located 185m above the sea and 80km from El Calafate (the nearest town). And we can walk on after a walk of 15 minutes along the Lake Rico. Most glaciers are in very high or extreme weather locations. One of the reasons it is so popular.

2) Status: Since 1917 the Glacier Perito Moreno is stable, ie, the surface, the width and length remained since. This indicates that the gain in the area of snow accumulation is sufficient to compensate for what was later lost in the loss zone, mainly by melting.

3) Breakdown: This unique phenomenon as spectacular as occurs approximately from 1940, the year the first break which comes to light. The breakdown process is initiated when the glacier touches the Magallanes Peninsula interrupting Rico to drain the lake Lago Argentino. This makes the lake level rise Rico day due to melting in the mountains and lack of drainage. Some months or years later, the pressure of all that water (7m at the break of March 2006) makes the glacier resist no more and breaks.
The rupture itself can last from one day to a week, depending on the amount of water accumulated in the Lake Rico and the mass of ice that blocks the passage of water. Breaking these cycles are very irregular and vary from 2 years to 16 years. Lately we have been very lucky with breaks in 2004 and 2006 but the previous break had been in 1988
For more information to visit the Perito Moreno Glacier feel free to contact our Argentina Travel Agency