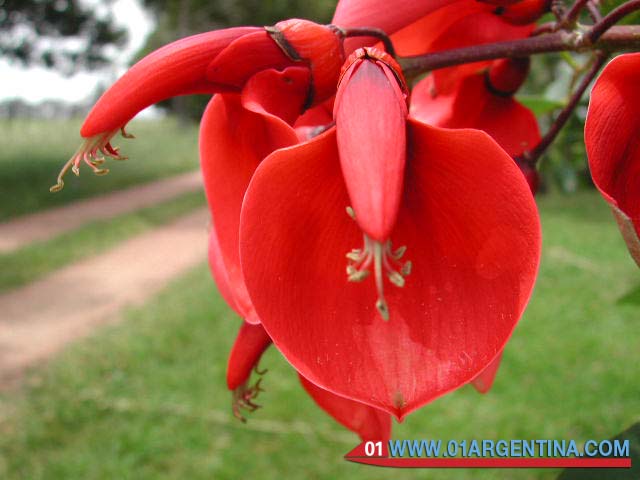 El Ceibo is a tree native to America, especially Argentina (coastal area), Uruguay (where is also the national flower), Brazil and Paraguay. It is of the legume family and grows on the banks of the Parana and Rio de la Plata, but also what can be found in areas near rivers, lakes and wetlands.
The tree is not very high and has a deep green foliage. Its flowers are large and a red lipstick that was declared National Flower Argentina on December 22, 1942 by decree of the National Executive Order No. 13,847 / 42, the day is November 22.
Remember you can look our Argentina Tours and contact us for any question.
Besides its roots are strong and affirm the floor counteracting the erosion caused by the waters. Timber, yellowish white and very soft, is used to make certain articles of reduced weight. Its flowers are used to dye fabrics.

The Legend of Ceibo

Legend has it that on the banks of the Parana lived an ugly indiecita, of coarse features, called Anahí. Although she was ugly, on summer evenings delighted to all the people of his Guarani tribe with his songs inspired by their gods and love the land that they owned … But came the invaders, those brave, bold and warlike beings skin white, devastating the tribes and wrested the land, idols, and their freedom.

Anahí was taken captive along with other Indians. He spent many days crying and many nights awake, until one day the dream beat his sentinel, the Indian girl managed to escape, but in doing so, the watchman woke up, and she, to achieve his goal, he plunged a knife into the chest his guardian, and quickly fled into the jungle.

The cry of the dying jailer woke the other Spaniards, who went on a chase hunt became poor Anahí, who at the time, was hit by the conquerors. These, in revenge for the death of the guardian, imposed as punishment death at the stake.
They tied her to a tree and started the fire, which seemed unwilling to extend its flames towards the Indian maiden, without murmuring word, suffered in silence, with his head tilted to one side. And when the fire began to rise, Anahí was becoming tree, identifying with the plant in an amazing miracle.
The next morning, the soldiers were found at the sight of a beautiful tree made of shiny green leaves and red flowers velvet, was shown in all its glory, as the symbol of courage and fortitude in suffering.