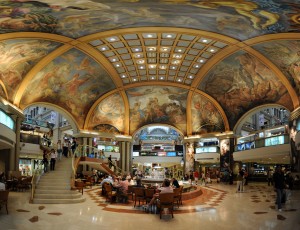 In 1946 five major mural painters captured their works in the area of ​​450m2 which occupies the central dome of Galerias Pacifico. The Berni, Castagnino Colmeiro, Spilimbergo and Urruchúa, artists agreed to make a decoration that achieved an iconic building of the primary values ​​and common socio-cultural practices in different cultures, such as the family and contact with nature.
The murals recorded a lot of situations, allegories and universal messages. However it warns that artists sought to create their own sketches beyond the original agreement on the whole, thereby ensuring the spontaneity of individual creation.
Surely these wonderful murals that speak for themselves, offer many different meanings and emotions as viewers have to appreciate them.
City Tour in Buenos Aires

Muralists: a collective project, committed and all

The mural paintings of the Galerias Pacifico were the first and only job he could realize the Mural Arts Workshop (TAM), founded in 1944 by the five artists who met their suitability for mural project.
The inspiration had come in 1933 with the visit of David Alfaro Siqueiros, who brought with them the experience that had been deployed in Mexico. The members of the TAM knew it was impossible to develop a movement similar to the Mexican who had lived a revolution and had the cultural politics of José Vasconcelos. However, they did not renounce the idea of all: this workshop formed as a collective space, looking to make walls for public art.
The call for this work in the Galerias Pacifico meant a big leap for the group: “They’re specifying a massed work together to change realities, occupying public spaces and break the question of art shown only in museums,” explains Cristina Rossi.
The muralists thought the job was a Pacific Galleries cornerstone of an expression to spread throughout the urban fabric. Unfortunately, this was the only job he could realize, by a lack of government initiative that was also reflected in the lack of conservation of cultural heritage.

The mural: an arduous teamwork

Urruchua
“The task at the top of the Galerias Pacifico is Bravissimo” Spilimbergo wrote to his wife. The work done by the TAM is a sign of strength that can reach ten hands for a goal. Exposure of Borges Cultural Center reflects the preparatory stage of the sketches and the choice of the subject as well as the evolution of the proposals of the artists and overcoming obstacles to implementation.
Starting from the problem of distributing a perfectly divisible into four dome, five artists, the group had twists and turns in the proposals. The curators emphasize that documentation seeking a compositional unity inside a consensual work in the workshop space is observed.
For these advocates of realism, the mural was one of the highest aspirations. The subject of the painting is defined by the curators as “the dignified respect for brotherly man, socially integrated through their work.” This man is from Argentina and lives in a global context of war. These mural art is a social art, committed humanist idea that this man is the only one capable of converting wealth with their work, but also to build peace.

The building, a witness to the political vicissitudes

Galleries that house the murals were subjected to the vicissitudes of the political future of the country. So the moments of brilliance, moments of lethargy were followed.
The building emerged as a commercial gallery in the nineteenth century, but that goal was displaced by the installation of British Railways. In 1945, the railway company decides to recover the ground floor commercial, maintaining offices in the remaining floors, which calls for the study of Aslan and Ezcurra. These architects are the ones who call the TAM for the iconographic program covering the dome and the four lunettes located at each of the entrances to the galleries.
The exhibition also realizes what happened beneath the mural over the years, a story has not ended yet. Initially, Galerias Pacifico hosted art exhibitions and news of general interest, and were forced space walk for the inhabitants of Buenos Aires. Over time, the mall began to decline and murals, to deteriorate.
In the sixties comes the first danger of demolition, thanks to an active resistance of artists and traders avoided. Just in 1978, the impending World Cup and Buenos Aires which seeks to give the best face, push the first restoration, which was coordinated by Antonio Berni.
In the nineties comes a new remodeling of the building, after being declared a historic monument. On that occasion the ornaments are removed and are taken to a dependent of the Ministry of Education building. In 2006 began a process of conservation to its final location in the museum designed by Clorindo Testa Reader, which is scheduled to open in 2010.
Thus, the exhibition opens tomorrow at the Borges Cultural Center invites you to stop on the value of this fundamental work of art in its dome houses Galerias Pacifico. Perhaps then, the mural no longer see us go distracted. Maybe so, we begin to look back at him.