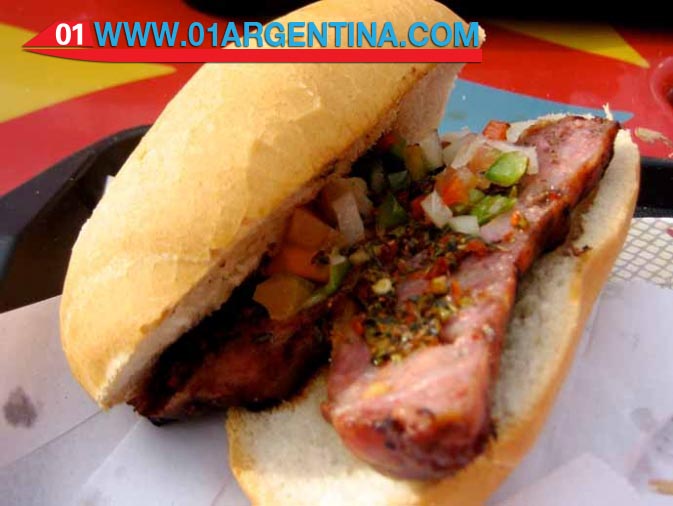 It is said that the cuisine of a country speaks volumes about the identity of its inhabitants. In the case of Argentina, the dishes not only have a very definite personality but also pies and the famous choripán (or chori to the most intimate) consumed daily, like schnitzel with fries.

hot irons, and a lot of grilled beef. It can not fail. The Argentine asado is an institution and almost every Sunday enjoy any patio or deck that has a grill, however small. Roast strip loin, empty, bondiola, entails, sweetbread, chitterlings, kidneys, sausages and black pudding are some of the cuts that delight everyone in this land. If accompanied with a good red wine, success is assured.

It is rumored that Argentines have liver bulletproof. It will both eat schnitzel with fries, most successful duo this side of the Rio de la Plata (more than Pimpernel). Very simple: it is a steak meat with egg batter and breadcrumbs that, for some reason that science has not yet been able to determine, combines fabulously well with a good crispy potatoes. It is also by far the favorite dish of Argentine children.
PIZZA

Italians lie: the pizza is already Argentine heritage. The mozzarella is eaten at all times and in all situations: passage through the streets, meeting friends or to sit and watch a football game on TV. Its natural companion is one or more cold beers. In addition to traditional muzza with olives, much is asked Neapolitan (cheese and tomato), the fugazetta (onion and cheese) or fainá, made from chickpea flour. In Buenos Aires, the combo Moscato (sweet wine), pizza and fainá can not miss in any neighborhood pizzeria.

Empanada is a thin bread dough or puff pastry stuffed with any salty or sweet food. It is clear that the one who wrote those lines never tried a pie Argentina, in all its versions: Salta, Santiago del Estero, Tucumán. In the most common tastes (meat, ham and cheese and humita) they can add raisins, potatoes and olives. The argenta pie is so famous that even deserves to have a street named.

It is the winter dish par excellence. Originating in northwestern Argentina, the locro is a thick corn-based and pumpkin stew, carrying meat, potatoes, beans, vegetables and chorizo (are also invited fat guts and tripe), among other ingredients. It is consumed mainly in commemorative dates: May 25 and July 9.

The first thing a tourist must do when you come to Buenos Aires is to take a taxi to the Buenos Aires waterfront, stopping in a cart (stalls) and ask for a choripán. With that reaches for the Argentine passport and, in some cases, to gain belly pain of the year. Chori is our street food par excellence: a sausage roast pig eats sandwich format. It is very requested in football stadiums and also serves to drive the players or the referee when you disagree with the outcome of the game.

The raviolada Sunday is the excuse to bring the Argentina family around a table and get everyone to fight against all. Ravioli with tomato sauce (tomato sauce and minced meat) or stew (with pieces of whole meat) are more Argentines dulce de leche. His formal description is boring: squares of pasta stuffed with ricotta, vegetables, ham and cheese and other variants. But they symbolize the family together, ie, the sum of all neuroses faced against a plate.

The tamale is a food of Andean origin, but in Argentina is richer than in Bolivia, Chile, Ecuador and Peru (why accuse us after send the part). It is prepared in two ways: in pot and in chala. The first version is a creamy stew that is achieved by grating the corn grains, which is added onion, milk, salt and cumin. The second is obtained by wrapping the same cream but without cooking, precut sheets husk. the package is then closed, with it high a thin ribbon and boiled. They can be added to stuffing bits of goat cheese (such as in Salta) and also pieces of meat and raisins.

When the desserts, flan with dulce de leche is the grand finale of any meal. It is made with whole eggs, milk and sugar. Although they say that is a Roman invention and Caesar himself tasted it before heading to the Senate, the flan is Argentine by adoption. Ask with dulce de leche is an obligation and add whipped cream is almost almost a perversion.
CHEESE AND SWEET

Officially known as vigilante, this dessert is one of the most traditional of Argentina and emblem of the national and popular. He is also known as fresh and sweet potatoes. It is just that: a piece of cheese and one of quince or sweet potato. But the combination of textures between both surprising and delicious. A whole argenta institution.