Humahuaca and Tilcara Carnival in Jujuy 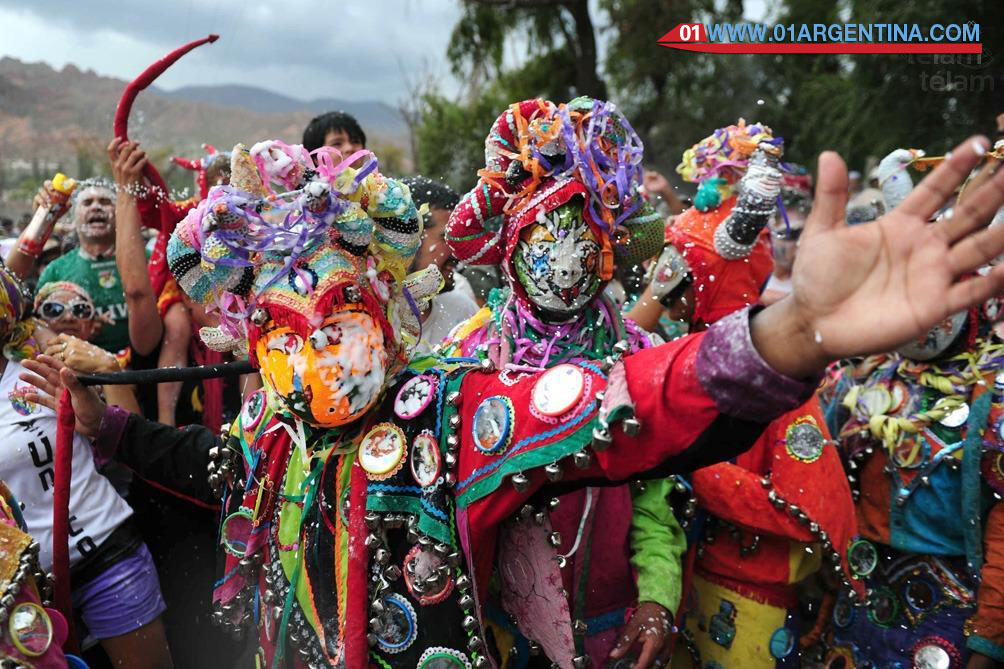 Humahuaca Carnival is a popular event, held at the beginning of Lent (40 days before Easter) in the area of ​​the Quebrada de Humahuaca, Jujuy Province, Argentina.
Introduced by the Spaniards in America, Carnival merged with native rituals designed to celebrate the fertility of the land and honor the deity of Mother Earth, the Pachamama, for the goods received. This is a short version and adapted to the Peruvian Inti Rami festival of Kapaj, which began in December and ended in March, where they drank, sang, ate and danced to the limit.

The celebration starts in each community with the unearthing of the devil, called Longtail or Pujllay, symbolizing the celebration, a stones apachetan 1, represented by a rag doll who was buried at the end of last carnival. The repressed desires are released and allowed for the celebration drunk without restraint, the moral precepts are shelved. The Catholic Church has been forced to take time to participate in the celebrations “pagan” .

There are dance and performed with traditional instruments like erkenchos, annats, charango and drums music. The people are dressed in colorful costumes and masks using bells to dress; impregnated face fun with flour and throwing streamers as talc and spread basil sprigs.

The tradition has indigenous, Spanish and Creole reminiscences. In addition, as the Quebrada de Humahuaca step yBolivia forced to Peru, it has assimilated of music and some characteristics of those countries.

The previous two compadres Carnival Thursday gather to celebrate the reunion, and the next Thursday shift the gossips who entertain themselves in fun copleadas recounting what happened throughout the year comes. Carnival Saturday lascomparsas meet.
It lasts eight days: the sun comparsas attend invitations, carnavalitos dancing in the streets, and night dance on the premises. The celebration ends “Temptation Sunday” with the “burial” Devil in a hole representing the mouth of the Pachamama, along with cigarettes, coca, streamers and beer. Dishes such as pies, lamb, goat cheese and drinking, among other things, chicha and between laments fun pray that next year there are then tested again.

In the small town of Tilcara it is where this carnival reaches its maximum fervor.

The celebration starts on Saturday before Carnival weekend when groups of comparsas reach the hillsides surrounding villages to unearth the “devil”, who were buried at the end of the carnival last year.

Once unearthed “the devil” firecrackers and the troupe (where many are disguised as devil) begins to descend to the people dancing to traditional music as Jujuy carnavalito thrown away. In all there you compare musicians with trumpets and snare drums, trombones, saxophone, drums, etc. The extras carry a banner that identify and roam the streets of the town, where different houses are invited to drink.

In the streets the different members of the groups you’re dressed and flour are thrown. Many have branches of basil (it is considered an aphrodisiac) leaving a very special aroma through the streets of the towns. In the street musicians sikuris there are also bands that play their melodies with every step.

After parading through the streets of towns, street musicians gather at certain points, called “fortress”. In these places rocks with music and dancing until dawn are armed.
Carnival Sunday, after several days of dancing and celebration, the celebration ends with the burial of the devil. The groups return to the hillsides, the same place where it began the festivities and the doll is buried with offerings (cigarettes, coca leaves, alcohol) and firecrackers it is finalized carnival.