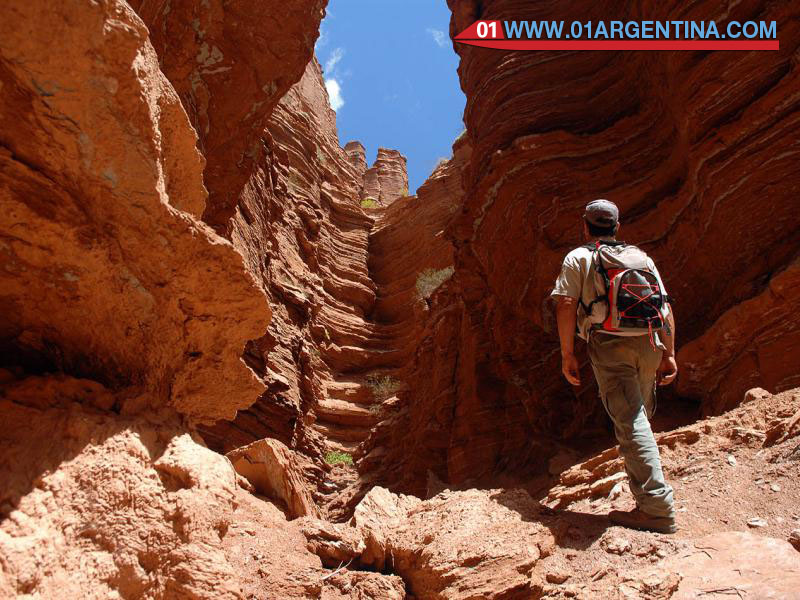 Dinosaur footprints, condors, guanacos and rabbits accompany the tour in of of the most exciting toursit destination in Argentina is full of trails National Park. Nature surprises in each with eroded forms over the years.
The visit to Sierra National Park Jaws is a kind of journey at the beginning of time. In this area of ​​150 thousand hectares, where it seems that at any moment it will appear a group of flying pterodactyls, it weaves and unravels a plot infinite sand castle carved by the wind in the province of San Luis.

The Cretaceous and Jurassic Park protects paleontological treasures and travelers are amazed when they come across surprises like a huge dinosaur footprint or walls in the middle of a red desert, which sprang from the depths of the earth when the Andes arose.

The National Park is located 126 kilometers from the city of San Luis, near the entrance, and amazes the site of more than twenty “cooker” or “jugs”, included within the perimeter of a large indigenous settlement. The feeling that the adventure has just begun is carved firmly in the minds of travelers when a ranger that also in place fossils of two species of pterosaurs or winged lizards were found.

The tour continues to Potrero de la Aguada, a unique geological formation: the huge natural amphitheater is surrounded by steep walls of sandstone and reddish agglomerates, in which erosion carved the most whimsical shapes.

Guanacos, collared peccaries, rabbits, bats, maras and pumas (harder to see, but present) accompany the way. The fauna also shelters protected species such as the common tortoise, peregrine falcon, the crowned eagle, the lesser pichiciego, yellow cardinal and the reinamora, surprising both the flora adapted to the particular environmental conditions of the place, as the dryness and erosion.

Self-guided transit way ways than one hour by two footpaths of viewpoints or more protracted excursions with guides, as Footprints of the Past, Farallones and guanacos: everything is possible.

Some choose the path Lookouts, two hours, where a walk along the esplanade is a valuable reward: a breathtaking to observe the large central depression formed by the erosion of approximately 4,500 hectares panoramic view. The Path Footprint Saurio and girl Grandmother (3 hours) wonderfully with beautiful specimens of plant Girl, walls with layers and Sauropod footprint of millions of years ago, along with the area called Intangible where things go its course as nature provides.

Four hours, the Farallones Canyon Trail deviates from Footprint. Down to the valley floor is feeling back in time and every meter, surprised to learn that sedimentary strata formed by increasingly ancient geological eras are depressed. At the end of the trail, steep walls 250 meters high gain unique ways skirt, the head of a bull, the bottle and the puma.

The trail leads Guanacos in three hours along a path and animals that gave name currently use. While the flora and geography of the mountains are interpreted, customs and routines guanacos are known and if they allow it, enjoying the passage of a herd, which is crowned with the satisfaction of watching condors insurance at the end of circuit.

In the “Grand Canyon in miniature”, the carving produced by nature through the centuries amazes through three paths between cliffs, cliffs, cornices and terraces. The huarpe community welcomes visitors with warmth as the commissary in Jaws, which satisfy the appetite after hours of walking.

There are many attractions that meet on a break from one to three days, at any time of year. In summer it is best to start early to avoid the sun, and in winter it is best to noon by low temperatures; but the natural wonders will always be there, available to the excitement, near the City of San Luis, Potrero de los Funes and Villa de Merlo.

San Luis can be reached by plane, Brigadier Mayor Cesar R. Ojeda its other provincial airports or airport; by bus or by car, by the RN 20, RN 146, the RN 148 and the RN 7. Villa Mercedes you are reached by routes 7 and 8. When the National Park Quijada accessed by Route 147, 126 kilometers City of San Luis. 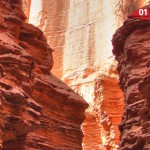 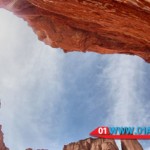 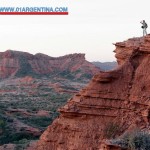 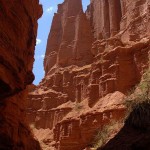 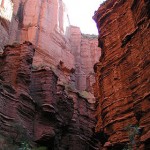 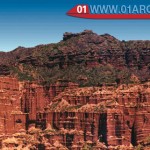