Puente del Inca as a World Heritage Site by UNESCO 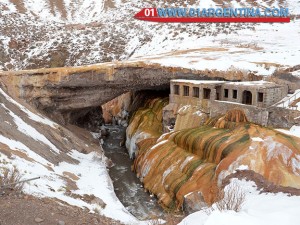 The high mountain area of Mendoza is part of the communications network created by native who was named UNESCO this Saturday.
Part of the high mountain area of Las Heras became Saturday at Heritage, to form the network of Inca Trail.
The Inca Trail, a master network of road communication that spread to six countries in South America, including Argentina, was declared Saturday World Heritage Site by Unesco, a distinction that recognizes the ingenuity of a prehispanic system that surprised the world.
The trails, which served the Inca to control his empire (Tahuantisuyo), extending from Argentina to Chile, Bolivia, Peru, Ecuador and Colombia, and were joined by a network of roads that were the Qhapac Nan (Quechua Inca Trail).
“This extraordinary trail system extends one of the geographical areas of the world greatest contrasts” between the Andes, the rainforest, the Pacific coasts and deserts, the statement said Unesco.
“The name means six countries for the recognition of one of the most important monuments of the Andean world,” he told AFP, Luis Lumbreras Flores, Project Archaeologist Camino Inca Peruvian Ministry of Culture.
The Qhapac Nan, the oldest network America’s roads, ran longitudinally throughout Tawantinsuyu along the Andes, from western Argentina to the south of modern Colombia. The main route is about 6000 kms from south to north.
This mountain road parallel to the Pacific Ocean was joined by transverse sections even came to the jungles and Gran Chaco in Argentina and Bolivia.
“There are other sections where the population still travels. Has cobbled areas, flagstone or landfills, and in some places you can see retaining walls on both sides of the road,” said Cristian Vizconde Peruvian archaeologist.
The distinction will get funding from international organizations for the conservation and restoration of trails and shrines that were erected around the track, the optimists say the network arqueólogos.Toda coast, highlands and jungle, totaled an area of ​​30,000 km, which interconnecting the four yours, or corners of the empire, the mythical capital, Cusco (Quechua, “navel” or “center”).
Peru meets most of the paths discovered the old routes. The most famous stretch, and reaching millions of tourists from around the world, from Cusco to Machu Picchu. They are 43 miles between forests, ancient stone steps. The road leads to the Puerta del Sol which offers majestic views of the ruins of Machu Picchu.

In Ecuador and Bolivia

The declaration of World Heritage “is definitely a big attraction for tourism if you fail Peru as it is doing,” he told AFP Roque Sevilla, president of Metropolitan Touring, a tour operator in Ecuador, where the roads are not exploited more that young adventurers.
“The Inca Trail has not only architectural value, also social because it was a whole way of life of a culture that had a special significance in our America,” he told AFP Luz Elena Coloma, CEO Quito Tourism Management Municipal tourism city.
The Inca Empire worked with a system of posts and messengers who traveled on foot. The messages were sent by a code of knots in a rope, which even today archaeologists try to decipher.
From Quito, an email or a letter to Cusco, which was entrusted to a courier or “snap” could take about 10 days, according to the researchers.
In Bolivia, where bare sections are in disrepair or many were destroyed, even by trucks used in mining, there are two paths: the path “Takesi” and the route of “El Choro”.
The first extends 70 kilometers and the second about 90 miles, both north of La Paz. The Unesco statement “shows off the route, gives force and allow projects to develop,” he told AFP Mukled Lourdes, president of the chamber of tourism operators in La Paz.

The Inca Trail was one pukara every 7 km (fortified place) which was used to control movement of passersby. And every 21 km an inn (posada) for the Inca and his entourage abasteciese rest and food and water, according to historians.
Besides trade, the routes also served for a rapid movement of the warriors in times of combat. According to Peruvian archaeologists, there are sections of the road network that are about 2000 years old and were built by ancient cultures such as the Huari, and adopted by the Incas.
The researchers suggest that the Inca Pachacutec, who built the citadel Machu Picchu, used those existing roads and other built uniting them in a network.
The sectors affected by road has also farmers and authorities who have used it for other purposes, such as Chachapoyas (Peru’s central jungle) which was destroyed in order to build a dirt road used for mining.