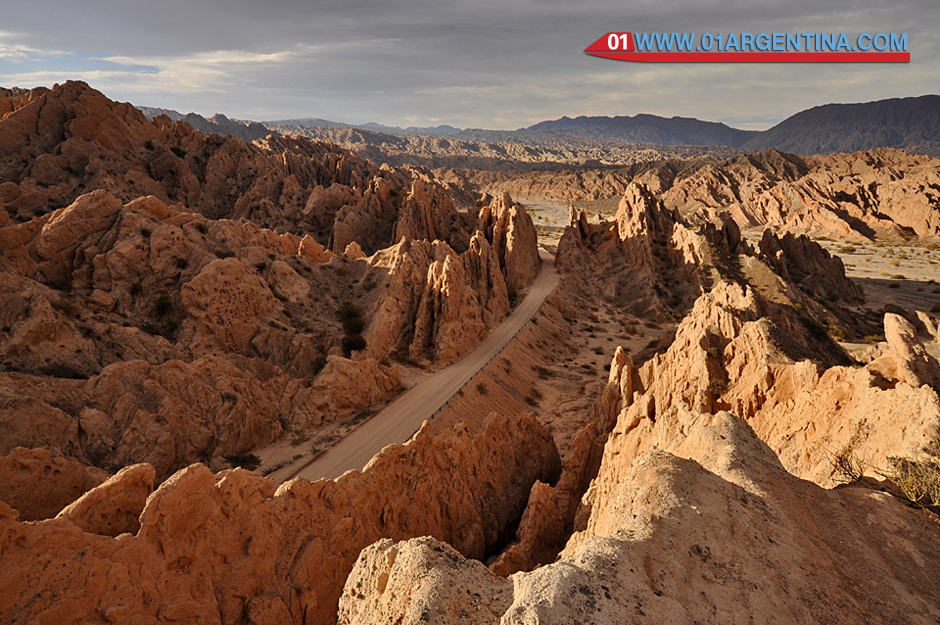 La Quebrada de Las Flechas is a geographical feature located at km 4380 of National Route 40 (section linking the towns of Cafayate and Cachi) in the Department of San Carlos in the province of Salta, north of Argentina, extending 20 km within the Valles Calchaquíes, from Angastaco to the Calchaquí River.
Distant about 260 km from the city of Salta (Cafayate), it is pointy rock formations that are steep narrow canyons with walls 20 meters high, making it one of the most attractive tourist and National Route 40.

While the formations are crossed, they highlight the “passage of Glacier” and especially the “passage of the Arrow”, which to a petrified glacier sharp points, which was declared a Natural Monument Angastaco by the provincial Law No. resembles 6808 in 1995.
During his career, located at km 4420 Route 40, it is the oldest Jesuit church in the Calchaquí Valley that dates from 1780. It was restored in 1969 by the current owners of the place (Finca El Carmen); made of adobe and thatched roof, with two colorful altars, the church seems to hang from a cliff, overlooking the valley in its entirety. From the place, and across the river, you can be entered between ancient rocks where archaeological remains as remnants of urns and pot of santamariana culture (or culture of Santa Maria), who inhabited these lands before the arrival of the Spaniards are.

It dates back to between 15 to 20 million years when large boulders began to rise on the edge of the Puna. (Hard, crystalline rocks originated in the Precambrian); Deep faults in the crust were lifted granitic and metamorphic rocks forming a mountainous buttress. Sedimentary plates (reddish brown sandstone pelleted before the Andes any) that were found at some point storey were broken by the rise of the mountains and were inclined end pointing to the sky arming narrow canyons with walls about 20 m high. Subsequently erosion and now the sharpened blades or arrowheads resemble one beside the other.
These layers were folded and fractured to receive the thrust of the Andean orogeny; these materials eventually became rocks were classified under the name Training Angastaco, for being the place where they reach their best.
Angastaco Formation within the three sections are distinguished. The lower section predominantly sandy gray and light reddish brown, the middle section with thick sandstone and conglomerate gray and the upper section essentially subordinate sandy mudstones.

Walking the Quebrada de Las Flechas
How to get to the Quebrada
The stretch of Route 40 that runs through the Natural Monument Angastaco described in Section from Santa Maria to Cachi.
Coming from the South (Cafayate, San Carlos) shortly before reaching the destination, the following tourist sites are crossed:

On reaching the river, which crosses the bridge, wide valley with river terraces are narrow, north the river down the throat or Pass of the Arrows.
This place was Piedra Pintada site of the Jesuit mission. The bottom seams inclined rock formation can be seen Angastaco.

Located on the west bank of the river, perpendicular to it. Route 40 runs across the middle.

The storm wind erosion (wind) and (rains) worked up the sandstone walls Cut Glacier. It is an arid area with little vegetation (kelp, rosette, broom and pitch).

Is the narrow passage or throat which runs the Calchaquí river between Angastaco and Piedra Pintada. To the north and east, the Sierra of the Quebrada Apacheta Chambao. To the South and West, the Arrow itself with its eroded arensicas with exotic forms.

Excavated by a stream which flows into the river Calchaquí, down from the Sierra del Cajon (or Quilmes) in the West. It is located before getting access to the town of Angataco

Cross the river terrace of the Calchaqui River before reaching Angastaco. It is the end point of the Natural Monument of Angastaco.
End of tour. Access to the town of Angastaco.