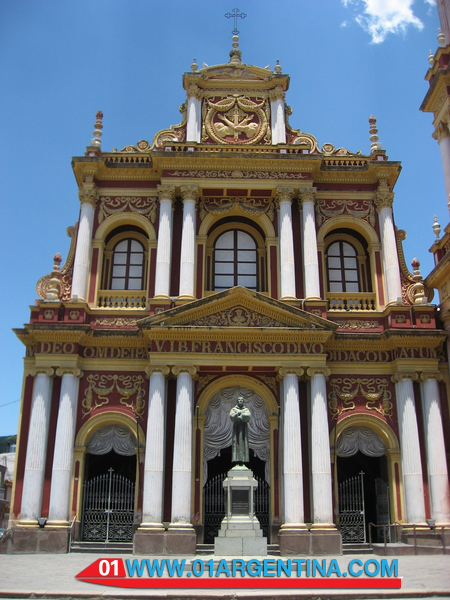 During the city tour of Salta you can see many cultural attractions like this church and convent which are one of the architectural references of the city of Salta. The temple is photographed by its striking color and design that attracts both during the day and during the night due to lighting.

Currently hundreds of tourists visit and photograph from the sidewalk across the street, but its history goes back to 1582 when Fray Bartolome de la Cruz took possession of the Hernando de Lerma block assigned to the Franciscans, to found the city.
In one site located in the historic founding of the city of Salta, just one block from the Plaza 9 de Julio, it is the Church of San Francisco, the Convent, the museum and the school.
The Franciscans had to make various versions of the temple over the years. The first building was created in 1606 by the convent of San Diego de Alcalá. This construction was not good and was deteriorating with the passage of time and tremors.
In 1759 he began to build a new church, but this was destroyed by fire in 1772.
The third version was completed by 30 July 1796 thanks to the start of work by the Fray Vicente Muñoz.
Construction of the facade of the church is what attracts. It was rebuilt between 1868 and 1882 by the Franciscan Luis Giorgi and the tower was the work of Teodoro Rauch and Francisco Righetti that is separate from the church and is 54 meters high.
Besides its terracotta facade design and ivory colors are contrasted, highlighting the complex ornamentation with Italian influence in its design. It has a central body decorated with garlands, flowers, crowns, inscriptions and gusts blinded. It also has false curtains in each of the three arcs of access to the temple.
Instead, the tower of the Church of San Francisco is a little more classic and is divided into four floors. Thanks to its lighting at night is a good attraction.
Inside the church you can see a decoration of the nineteenth century, combines design with the outside, but is a bit more elegant. It highlights valuable works as the image of San Pedro de Alcantara attributed to the Spanish sculptor Alonso Cano, a sculpture of Our Lady of the Snows and a painting of St Francis of Assisi.
Another thing to know is that there are buried the remains of Francisco de Gurruchaga (creator of the Argentina Navy), Pachi Gorriti and Mary Magdalene and the Court of Goyechea (mother of Gral. Martín Miguel de Guemes).
The Church of San Francisco was declared a minor basilica in 1992 and a National Historic Landmark in 1941.
In addition to the church you can visit the prestigious Franciscan Library, the museum of the Franciscans in the morning and crafts fair that is in an outdoor room by the bell.

Since this hill a spectacular view of the city, which it fails to understand the geography of the valley of Lerma, in which the city is immersed is obtained.

The hill is located at a height of 269 meters above the city of Salta. One way to climb is a picturesque drive along paved road entirely. You can also walk up the stairs that start behind the Monument to Guemes, whereby the ordeal takes place in Easter and is easy to perform.
But the easiest way to perform and tour promotion is part of the Cable Headquartered in San Martin Park and climbs slowly allowing enjoy an unobstructed view.
At the top you can eat or drink in the confectionery, buy crafts, physical exercise and walk in the park appreciating the unbeatable views and the nature of the place.

MUSEUM OF ARCHAEOLOGY OF THE MOUNTAIN

The Museum of High Altitude Archaeology was created to preserve one of the most important archaeological discoveries in Argentina.

In a sector of a historic building in central Salta, facing the Plaza 9 de Julio the MAAM, famous for its mummies known as the “Children of Llullaillaco” it is located.

In 1999, three Inca children were found frozen at the peak of the Llullaillaco Volcano, located to the west of the province of Salta at 6,700 meters. Along with the mummies had hundred forty six items that make up the trousseau for the journey to the gods.

The “Children of Llullaillaco” lived more than 500 years ago when the Incas ruled northern Argentina and Chile until the arrival of the Spaniards.
In the museum you can see the mummies of Llullaillaco mummies and others but between all are rotated for preservation in special cold chambers. At the same time video, clothing and accounts of the expedition that found are.